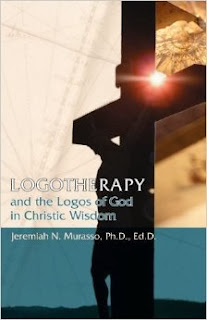 Father Jeremiah N. Murasso, Ph.D., is the Robert C. Leslie Professor of Pastoral Logotherapy at the Graduate Theological Foundation.  Father Murasso was ordained to the priesthood in the Roman Catholic Church in 1979.  He holds multiple graduate degrees in the areas of theology, philosophy, psychology, and education.  At the recent World Congress on Viktor Frankl’s Logotherapy held in Dallas, Texas, Father Murasso received the Robert C. Leslie Award for outstanding contributions to the fields and interfaces of psychology and religion.

The following presentation was delivered to the World Congress on June 20, 2013 and is entitled “Pastoral Logotherapy: Seeking Wholeness Through Healing Mankind’s Spiritual Malaise.”  We join the lecture in progress.

Father Murasso is the author of Logotherapy and the Logos of God in Christic Wisdom published in 2008.  The Amazon link to the book is found here.

Thank you for listening. Please email any questions or comments to logotalk@gmail.com and may you have a meaningful day.
Posted by Marshall H. Lewis at 2:58 PM No comments: