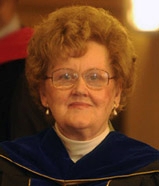 Ann V. Graber is Fellow, Professor of Pastoral Logotherapy, and Director of the Graduate Center for Pastoral Logotherapy at the Graduate Theological Foundation. This educational initiative is the first of its kind by a graduate-level institution focused specifically upon the pastoral character of the theory and practice of Viktor Frankl’s logotherapy being offered to ministry professionals.

Growing up in Europe, Ann Graber received most of her primary, secondary, and initial post-secondary education in Austria. Later she continued her higher education in the U.S. Upon earning the Diplomate in Logotherapy credential, she joined the international faculty of the Viktor Frankl Institute of Logotherapy and participated in developing a comprehensive curriculum in Franklian Psychology/Logotherapy in the English language.  She also initiated and directed the Institute’s Distance Learning Program that has attracted students interested in logotherapy from every continent. A life-time member of the Viktor Frankl Institute, Dr. Graber serves as liaison between the Institute and the Foundation.

In 2002, after completing her Ph.D. studies at the Graduate Theological Foundation, Dr. Graber was invited to join the Foundation faculty. She has taught Foundation Seminars and Institutes on Viktor Frankl’s logotherapy on-site, as well as E-tutorials, telephone tutorials, and residential tutorials. A frequent presenter at regional and international conferences, Dr. Graber has received numerous awards through the years. Her articles have been published in Foundation Theology: Faculty Essays for Ministry Professionals, The International Forum for Logotherapy, A Chrysalis Reader, and other publications. Some of her work has been translated (whole or in part) into foreign languages. In 2009, the Graduate Theological Foundation awarded the degree of Doctor of Divinity honoris causa to Ann V. Graber in recognition of distinguished service and internationally recognized scholarship in Viktor Frankl’s logotherapy. When the Foundation decided to establish the Graduate Center for Pastoral Logotherapy in 2012, Dr. Graber was honored to be asked to serve as its Director.

Ann V. Graber is the author of Viktor Frankl's Logotherapy: Method of Choice in Ecumenical Pastoral Psychology and The Journey Home: Preparing for Life's Ultimate Adventure.  The Journey Home is now available as an audio CD.  In this important interview, Ann focuses on her second book wherein she discusses her near-death experience.  To listen free to Chapter 1 "Adventure Inward" from the audio book, go to: http://midnightsunburstmusic.com/msbm/JourneyHome.html

Dr. Graber and the Graduate Theological Foundation have announced a new course taught by Professor Graber:  Near Death Experiences and their Life-Transforming Impact.  The primary objective of the course is to help lessen the fear of death and dying.  It will be offered as either a telephone- or an electronic-tutorial.

The full text of the announcement read in the interview can be found here:  Announcing the Graduate Center for Pastoral Logotherapy.

The other books mentioned during the interview are:

On Life after Death by Dr. Elisabeth Kübler-Ross (a book in which she cites Frankl).

Proof of Heaven: A Neurosurgeon's Journey into the Afterlife by Dr. Eben Alexander.

Links from News and Announcements this month:

Logotherapy and Existential Analysis:  An Introduction to the Theory and Therapy of Viktor Frankl, an online continuing education course offered by the Zur Institute.

Logotherapy and Existential Analysis I offered by A. Batthyany in Istanbul, Turkey beginning February, 2014..

Thank you for listening. Please email any questions or comments to logotalk@gmail.com and may you have a meaningful day.
Posted by Marshall H. Lewis at 6:22 PM No comments: